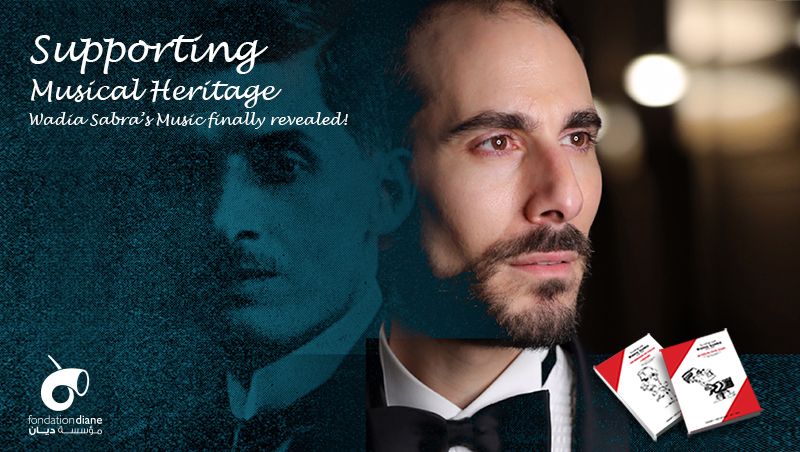 With more than 45 musical concerts in its portfolio, "Fondation Diane" continues to support art, against all odds!  Deeply rooted into Lebanon's history and values, the foundation contributes to reviving the Lebanese musical heritage by sponsoring "the 1st Modern Edition of Wadia Sabra's Music by Fady Jeanbart".

Who is Wadia Sabra ?

Wadia Sabra is the composer of the Lebanese anthem in 1927 and the founder of the national music conservatory in 1929. His music was hidden by his wife after his death in 1952 and was given to the CPML (Centre Du Patrimoine Musical Libanais) by his family in 2016.

70 years after Sabra’s death, his music resurfaces and it is available to musicians worldwide.

He is considered as the pioneer and founding father of classical music in Lebanon.

People only know him for the National Anthem but he is more than that. He’s the 1st Lebanese to study at the Paris Conservatory in 1894. He also founded the current Lebanese Conservatoire in 1910. It was first called Dar Al Mousica, then became official in 1925 and he remained its director till the end.

He composed 3 operas that were played many times in Lebanon, one of which is the very first Arabic opera called “The Two Kings” composed in 1927.

All his archives were given by the family to the CPML (Centre du Patrimoine Musical Libanais) in 2016, and Fady Jeanbart was commissioned by the center to research and do a modern edition of his works.

After 2 years of serious research, Fady Jeanbart was able to come out with 2 volumes of his music that are now available to all musicians and musicologists:

At a time where the very existence of Lebanon is being threatened, "Fondation Diane" contributes to the work of Fady Jeanbart, who went back to the Genesis of our musical heritage and brought it back to Life.

It is the “Unearthing of the lost and forgotten Lebanese musical heritage”!

Wadia Sabra's music is finally out... 70 years after they were hidden!!!

Fondation Diane is a non-profit organization that was created in 2012 by Diana Sfeir Fadel as a response to the environmental, economic, political and cultural marasmus in which the country was debating, and its disastrous consequences on all levels, as well as the image of Lebanon in the world and the despair in the heart of Lebanese people.

Our Vision is to give birth to a new citizen who is conscious of his rights and duties, and make Lebanon a pioneer country for sustainable development in the region by promoting the value of our national resources.

Our Mission is to enlighten the citizens about their responsibilities, motivate and mobilize them to resuscitate their sense of solidarity, and support creative minds who are taking action towards change.

Fady Jeanbart is a baritone who trained and sang in Paris for over 10 years. He studied in prestigious conservatoires such as CRR de Boulogne-Billancourt and attended many masterclasses with internationally acclaimed vocal coaches. In 2012 he decided to share his knowledge with his compatriots and returned to Lebanon. He has become a renowned voice teacher.

The baritone Fady Jeanbart has performed in operas and operettas as well as oratorios and recitals, in France, Canada and Lebanon. In Paris, he improved his skills with several renowned teachers such as; Blandine de Saint-Sauveur, Jean-Louis Dumoulin, Raphaël Sikorski and Agnès de Brunhoff. He is also a singing teacher in Lebanon. Passionate about the work of Wadia Sabra, he is determined to make it known.