Diana Sfeir Fadel: an Honorary Board Member in the WLC 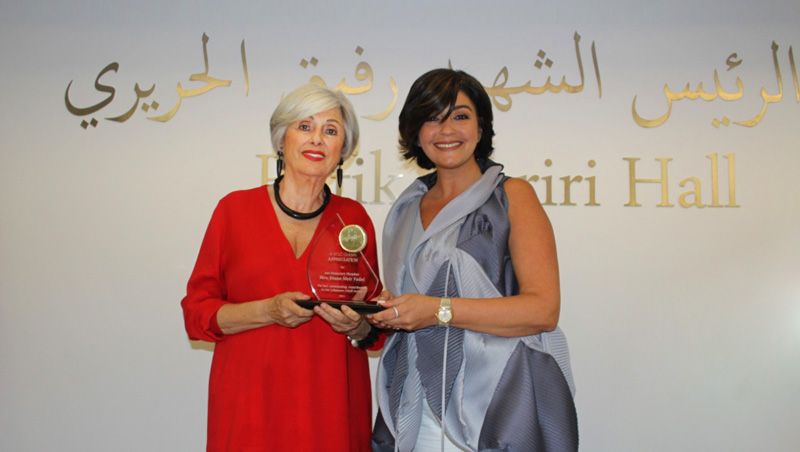 In the context of women empowerment, Diana Sfeir Fadel, "Fondation Diane's" Founder & President, was appointed on 20 May 2021, as an honorary board member in the WLC "Women Leaders Council of Lebanon".

This gathering was held at the WLC headquarters in Sanayeh-Beirut at the Chamber of Commerce as part of the council’s yearly general assembly, and it aimed at recognizing the merit of Mrs. Fadel in achieving a long and successful career that was recently crowned by her appointment as Chairwoman & CEO of one of the most renowned enterprises in Lebanon, the ABC Department Stores, while supporting young women, men, and startups, and consequently help boosting the economy. She discussed the role of woman in her self-development in specific, and in female empowerment in general, in the presence of the WLC board members including the President, Mrs. Madiha Raslan, as well as key women entrepreneurs from various sectors.

In her speech, Mrs. Raslan welcomed Mrs. Fadel as a new member on board, and introduced her as a role model for women in investment and entrepreneurship, and a strong and resilient person whose experience has shaped the business landscape in the region. She expressed it this way: “I am delighted to be working with a like-minded person who fights for women’s rights and equality. I admit to have put my trust in Diana, she who has never failed at spreading positivity, bringing change, and putting things into perspective”.

Mrs. Raslan then revealed “Jazzmin” Avenue, a one-of-a-kind investment by 9 ladies, a new concept that empowers the female entrepreneurs. Jazzmin’s first mini-department store will be open for business in June at ABC Achrafieh.

In her intervention, Mrs. Fadel expressed her gratitude to have received this honorary award. “It is an honor to me to be among you, and to have earned this title. I have relentlessly defended women, and continuously supported their advancement”, she said.

She then gave an inspirational presentation about “The Role and Success of Women in the Society”. In politics, she stressed on the fact that, even nowadays, women are still not free to decide or act for themselves! They are still subordinating to men till date, since the majority of electors is feminine (52%) and they still don’t vote for their peers, or aren’t eager to run for elections! “Women are the biggest obstacle to women” she said. “If all ladies vote for one another, we shouldn’t need a quota!” She encouraged them to unite efforts by saying: “Solidarity between women is the key to their success in reaching the parliament with great numbers".

Afterwards, she shed the light on the remarkable accomplishments of women in every aspect of their lives, whether personal or in business, starting with their studies, to raising a family, leading a managerial position, to managing trade and finance, decision-making, and politics. In this context, Diana discussed the milestones of her life since her early childhood and explained how, through boldness and perseverance, she was able to accomplish her goals. “I am now the Chairwoman and CEO of ABC; I would have never reached this highly ranked position if I didn’t believe in myself”.

She continued: “To be or not to be” drove my whole conduct in life. With time and experience, I learnt that I have skills that were evident! I had to trust my capabilities and take risks. Despite the obstacles that seemed unbreakable back then – the patriarchal society and the gender stereotype - I had to believe that I have a fundamental part to play in life. I faced all the challenges with bravery, until I finally succeeded in persuading the males in my family about my potential and about the importance of gender equality. I have gone a long way to leverage and redefine the role of women in society!”

“Throughout my experience at ABC, I have encountered many ladies who are true leaders! I am really surprised with their level of professionalism and managerial skills! The economy has put its toll on our business, but I have full confidence that we will succeed and emerge stronger from this crisis”, she assures.

With concrete examples, facts, and tangible numbers, she confirmed that “Women Are Better Leaders, Better Managers, and Better Investors than Men!” She said:

The "Gender Pay Gap"! Figures reveal widespread inequality across businesses, as 8 out 10 British companies continue to pay men more on average than women. (The Guardian)

Inspired by her speech, the audience had to engage in an interesting Q&A session with Diana, who at last was handed the trophy amidst happy and touching moments. The gathering was then followed by a group photo and a cocktail that was enjoyed by the attendees.